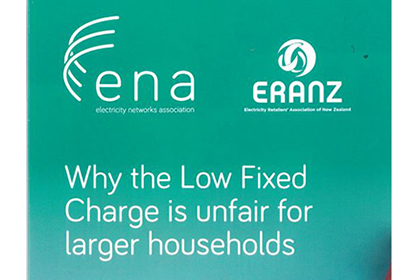 The National Party’s decision to remove the low fixed charge regulations for electricity consumption in its first 100 days if elected has been welcomed by the electricity retailers and electricity networks associations.

National’s promise reinforces the commitment also made by the coalition Government to remove the regulations.

The regulations have had a perverse outcome and need to go, says Graeme Peters, chief executive of the Electricity Networks Association (ENA).

“So it’s good news that both the Government and National have now committed to their removal.”

“The current regulations should more fairly have been called the High Variable Charge regulations.”

In exchange for an unsustainably low daily fixed charge of 30 cents per day, consumers paid a higher rate for the electricity they consume.

Cameron Burrows, chief executive of the Electricity Retailers Association (ERANZ), says the regulations had created a cross-subsidy, where larger, low-income families ended up subsidising the real cost of providing electricity to smaller, often wealthier, households who lived in well-insulated housing.

Often these smaller, wealthier households could afford to further lower their electricity consumption by the use of solar panels and other technology, leaving larger households to pick up an increasingly disproportionate share of the costs.

“We believe all consumers should be making a fair contribution to the actual costs of their electricity supply,” Burrows says.

“Getting rid of these regulations, that are no longer fit-for-purpose, will go a long way towards achieving fairer pricing for all New Zealanders, and lowering the price for large households.”

Currently ENA and ERANZ were proactively working with the Ministry for Business, Innovation and Employment (MBIE) to design a transition arrangement that will minimise the price impact on those smaller users who are currently being subsidised by large users.

It is expected that the current low fixed charge prices will be phased out gradually over at least five years.