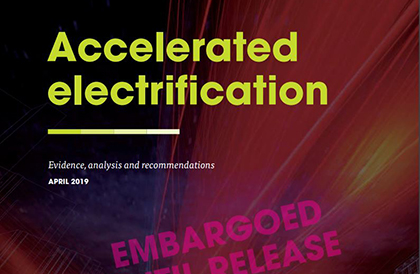 Graeme Peters, chief executive of the ENA, said one of the key recommendations, endorsed by the Government, is to prioritise the transition of New Zealand’s transport fleet and industrial heat requirements from fossil-fuel-based energy to electricity over the next 15 years.

“It makes real sense to accelerate electrification – the ICCC estimates the net savings of electrifying both transport and process heat as 5.4 million tonnes of CO2 equivalent (CO2e) greenhouse gas emissions per year by 2035.”

This transformation will require New Zealand’s energy infrastructure being able to cope.

“The ENA and the local lines networks have been proactively readying themselves for this future,” Mr Peters said.

“ENA’s recently published Network Transformation Roadmap is aimed to support and guide electricity distribution businesses (EDBs) so they can best position themselves to be ready for a fast-changing future.”

To support accelerated electrification, the ICCC also identified that changes would be needed in the resource management and electricity regulatory system.

These would be needed, for example, to expedite the local authority planning processes for the development of new, smaller-scale wind farms and their integration with local network infrastructure.

“EDBs have long argued that the development of some local distribution assets – particularly critical sub-transmission assets – should have similar or equivalent levels of protection to national transmission infrastructure.”