Getting ready for electrification 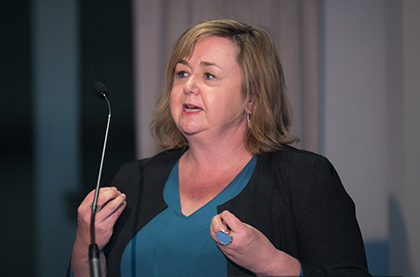 Electricity networks are preparing for much greater use of electricity to meet ambitious climate goals, says Graeme Peters, chief executive of the Electricity Networks Association (ENA).

A comprehensive review of progress towards readiness for widespread electrification of New Zealand’s energy supply and consumption is being undertaken by the ENA and is well advanced.

Speaking at the event, Minister of Energy and Resources Megan Woods said she welcomed the review and its findings two years on from her first launching ENA’s Network Transformation Roadmap (NTR) and would be looking forward to continuing to work with the industry as the journey progresses.

“While it is not without its challenges, it is a momentous and exciting time to be involved in the energy sector right now and I’d like to acknowledge all the important work the Electricity Networks Association is doing as we take significant steps towards decarbonising our economy.”

The headline conclusion of the review is that the NTR is more relevant than ever, Graeme Peters said.

Decarbonisation will be challenging for all sectors, including the electricity sector as lines networks and their operations will be transformed to meet future needs of customers and uptake of new technologies during the transition away from fossil fuels.

“The sector knew it would be a challenge and so it started developing the roadmap in 2017, launching it in 2019 with the clear stated intent of keeping it under review to ensure it remained fit for purpose and on course,” Peters said.

Since the roadmap was published, the government’s embrace of the Climate Change Commission’s recommendations for the electrification of transport and the conversion of industrial heat from fossil fuel sources to renewable electricity have validated the necessity for early planning, he said.

Lines companies – all members of the ENA – have been undertaking critical underpinning projects in preparation for the upcoming transformation.

While the roadmap looked at a range of possible futures and what would be needed to support these, Peters said the reason the NTR is still pointing in the right direction is that it was underpinned by the core assumption that New Zealand would transition to a low carbon future.

“All electricity distribution networks are up for the challenge, understand the critical role they have to play and are working on the areas that are important.”

Keeping finding ways for lines companies to work together and to collaborate with themselves and other industry stakeholders will be vital to the roadmap’s ultimate success, Peters said.

The two-year review by engineering and strategy consultant Allan Miller – who steered development of the roadmap - is well underway and due to be published before June 2021.