ENA and members lay out priorities to Commerce Commission 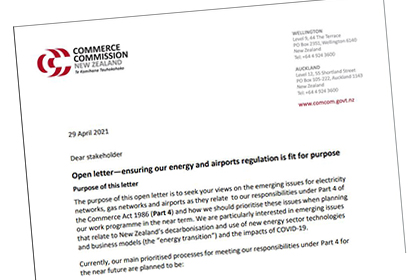 The Commission held a stakeholder workshop in December to drill into the responses to its open letter from earlier in the year around potential changes to Part 4 of the Commerce Act.

April's open letter sought input on what is required to ensure that the regulatory regime under Part 4 remained fit for purpose in light of the current and ongoing evolution of the electricity and gas industries.

ENA and members responded to the open letter setting out the areas where reform was necessary, including the need for new approaches to the development of capital expenditure allowances, the need for customer-driven capital expenditure to be excluded from the IRIS, as well as identifying components of the current regime that will remain fit for purpose.

The Commission requested that each stakeholder detail their three top changes. ENA’s top three were:

Other stakeholders including ENA members also held similar priorities for reform and noted:

ENA is hopeful that the Commission will take on board the feedback from ENA and members as it kicks off its information disclosure and input methodologies reviews in 2022.