Making sure the consumer voice is heard 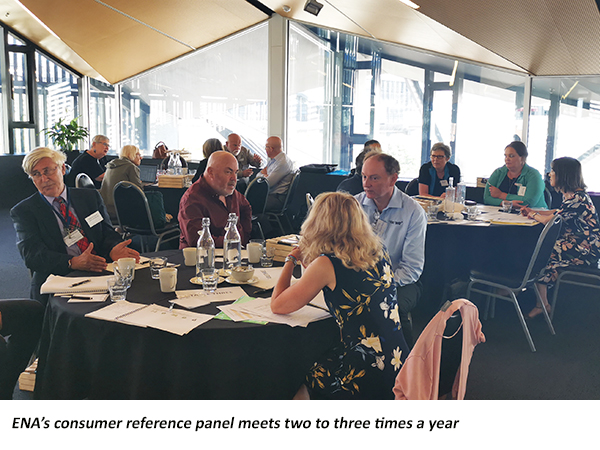 Businesses know that quality feedback from their customers is precious, but it’s not always easy to come by. Never more so than when the customer is buying something they’d prefer not to think about.

In the case of electricity, it’s been estimated that the average consumer at most devotes all of eight minutes a year to thinking about their electricity options.

It’s one of those commodities that most agree is essential but is not something people generally spend time mulling over. Compared, say, to the interest around another commodity like food, electricity doesn’t come close to even generating the level of interest of your next takeaway let alone match the anticipation of fine dining.

So, while the consumer voice is undoubtedly important to industry, it’s often muted by a blanket of indifference.

That’s of course until the electrons stop flowing, computer screens are blank, phones can’t be charged, and lights, heaters and cookers are off. That’s when normal life comes to an ill-tempered halt.

When trying to understand what customers really think of a business, marketeers often use focus groups. But in the case of electricity – opinions around which usually lurk deep below the surface — the biggest part of a focus group session is spent reminding people what product they’re already getting and how they’re paying for it. That’s before being able to get to the nitty gritty as to preferences around new choices in pricing and technology.

As a solution, three years ago the Electricity Networks Association recruited a panel of consumer representatives to give informed feedback on behalf of the ‘silent majority’.

The beauty of this approach being that, unlike a one-off focus group, the panel members are in place in semi-perpetuity – gaining an understanding of the issues and doing the detailed thinking that others will run a mile to avoid.

And thankfully, five sessions on – possibly as much as a surprise to the panelists as anyone else – the panel members themselves seem to enjoy the opportunity to go where most consumers fear to tread: deep-diving into the arcane world of electricity distribution, recognising the importance of this commodity to the quality of our daily lives.

They are willing to sacrifice four hours of their normal working lives every few months to ensuring the voice of their constituents gets heard.

They bring a diversity of perspectives and understandings, at times diverging from the assumptions made by politicians, bureaucrats and regulators with respect to consumers’ preferences.

Panelist Bern Sommerfeld who represents Grey Power says the panel "has a good representation of most New Zealanders and the interchange of ideas and views makes it all worthwhile".

Erin Gray who represents consumers in the central North Island Turangi/Te Kuiti area says ENA’s panel "provides thought provoking discussion on issues about which most New Zealanders are not aware of, nor consider, when they switch on their appliances each day".

Generally, the overwhelming consensus values simplicity and clarity over market purity and complexity.

Panelists often favour fairness over strict adherence to economic theory. They bring a realistic assessment of consumer expectations and engagement.

Among the topics the panel has provided useful input into:

Taking up one of the key recommendations of the electricity price review conducted 18 months ago, the Government is currently establishing its own consumer advocacy council. So the consumer voice looks set to be at least audible where previously it was almost non-existent.

While at times this may challenge the thinking and assumptions of the electricity sector, given the increasing significance electricity will have in transforming our energy economy away from carbon-based fuels, it will also be more important than ever to listen to consumers to ensure the public is on board with the transformation.

It should be some comfort for people to know that groups such as the ENA-initiated panel are representing consumer’s interests, so that they themselves still don’t have to consciously think about electricity any more than the allotted eight minutes a year